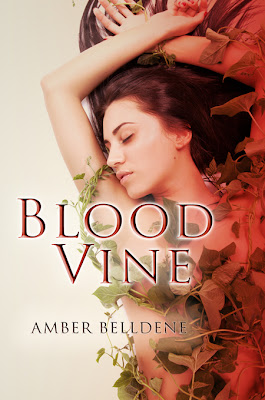 When public relations pro Zoey Porter arrives at an enchanting California winery, she discovers her sexy new client is the almost one-night stand she can't forget. After her husband's suicide, Zoey has vowed never to risk her heart again. But can she walk away from the intriguing winemaker a second time?

Driven from Croatia by his ancient foes, vampire Andre Maras has finally made a blood-like wine to cure his fellow refugees. Now he needs Zoey's PR expertise to reach them. After his wife's death, Andre has a vow of his own—never to risk another painful blood bond. And one taste of the tempting Zoey would bind him to her eternally.

His secrets stall her PR plans. Her jealousy is stoked by the blissed-out beauties leaving his bedroom. At every turn, he utterly fails to resist her. When she discovers he is a vampire, will she be lost to the golden-eyed Hunters, or lose herself to the emptiness in her heart, before she can help him save his kind?
Show More
Show Less
Because I begged and pleaded (not really, she's way too nice to make me beg) Amber agreed to answer a few of our questions.

Omnific: Blood Vine is a vampire story, but they are different vampires (Sexy as all get out by the way!). How hard is it to create a whole new mythology for your story?

Amber: Great question!  It wasn’t too hard.  I’ve read about a million vampire books, so I am familiar with all the conventions, and the liberties taken with them.  The underlying premise of Blood Vine, that vampires are bound to their native soil, comes from the idea that vampires must sleep in coffins lined with the soil where they were buried.  I played around with the implications of this convention and remembered something I’d learned about Homer’s Odyssey from a preaching professor back in seminary—the ancient Greeks understood nostalgia to be one of the most basic and powerful human emotions.  All this sounds really geeky and intellectual, but what it feels like to my vampires is just plain, old gut wrenching.  The rest of the mythology just kind of evolved from that premise—I knew how Andre had become a vampire, and so I knew he didn’t die and spend a night underground, which meant he was alive, just a different species from us humans.  And yes, I think they’re a rather sexy species too!

Omnific: What was your inspiration for Blood Vine?

Amber: Probably the very first inspiration was my ravenous craving for vampire novels during my pregnancy.  I consumed them at the rate of two per day during my third trimester and into my maternity leave.  Then, I got analytical about what made them work, and why I loved them, and so I began to dream about writing a story like that.  One day, inspiration struck on the way home from a wine shop in my neighborhood in San Francisco.  I can still remember exactly which stretch of block I was on under some lovely, smelly eucalyptus trees (very near Omnific author Sarah Glover’s house, in fact, although I didn’t know her then!).  And, I suddenly knew I had to set the series in wine country, north of where I live.   I know a bit about wine, and that region.  But more importantly, I love romance novels where the hero and heroine are stuck together in close proximity, with plenty of chances to get under each other’s skin, and a winery is perfect for that.
Omnific: Can you share a little bit about your writing process with us? Are you a planner/outliner or do you just write as it comes?
Amber: I am what they call a “plantser”—halfway in between.  I usually know my plot arc when I start writing, but I don’t fully understand my characters.  Once I get to know them, things shift around a little.  I’ve tried to plan things out more before I start, but I end up changing too much that way, and the planning becomes wasted effort.  When I'm in the throes of writing a novel, I finish one scene and immediately begin imagining the next one—I never watch T.V. or turn on the radio because I am totally consumed by mentally drafting the next part of the story.

Omnific: Since Omnific is all about the romance...what is your favorite romance scene in a book?
Amber: What a great question.  Can I say two?  I love the scene near the beginning of Diana Gabaldon’s Outlander, when Claire is examining Jamie’s scars.  All kinds of sexual and spiritual stuff goes on for me with scars, and the way our bodies heal but we carry the marks of our pain.  Also, I am a huge fan of J.R. Ward’s Black Dagger Brotherhood, and my favorite brother is Vishous, who is terribly scarred by his father.  I love the scene in Lover Unbound when his heroine, a physician, discovers his below-the-waist scars, and that book has one of my all-time favorite sex scenes in it, too.
Omnific: Now, if they made that into a movie who would you want cast opposite you?

Amber: I like the subtlety of this question.  Of course I would be the heroine J!

And when it comes to Vishous, I think he is one of the few heroes I actually want for myself, not for his Doc Jane.  But I have never let myself consider who would play him.   So, when I read this question, I put out a call on Facebook and Twitter for suggestions, and several pictures of very handsome men came my way.  But none of them were my Vishous.

That’s what I love about reading—the way our reading minds participate with the author’s words to imagine something wholly unique to our particular encounter with a book.  What you like about Outlander might not be what someone else likes about it, you know?


So thanks for the help, tweeps, but y’all can have those Vishouses, and I’ll just keep mine to myself.

Omnific: Finally, are you working on anything new? *cough* sequel *cough*


Amber: I find that coughing very flattering—seriously, the idea that people want to read more of my work is humbling and thrilling.  Yes, I’m making my final revision on the sequel to Blood Vine right now, and plan to get started on the third book immediately!

Thanks so much Amber! And since you didn't have a Vicious, I went and found a compromise - one that doesn't ruin the pic you have in your head. HAHAHA! And in case anyone is wondering (because I did immediately email her back and ask about that favorite sex scene) it is Jane+V+sink!

This is one that you definitely don't want to miss!! It's exciting, and sexy and romantic...sigh...I love this book!

If you want to find Amber and get some more information about Blood Vine or her attachment to Jamie Fraser or Vishous, here's where to go:

Posted by Omnific Publishing at 9:28 AM