It's been a busy month for Omnific as we celebrate our third year of bringing great stories to our readers and now we have another new one.

Justine Dell's newest release is a story of first love and reconnecting with who you are, and we are so excited to bring you All American Girl. 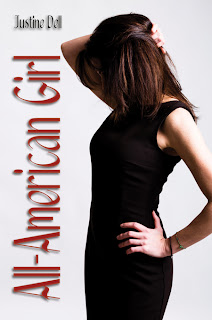 At the age of thirty, with two failed marriages and a tanking writing career, Samantha Moore deals with the world with the only tool she had left: anger. And she's tired of it. When her grandmother's near-death sends her rushing back home to Vermont, she hopes for the chance to overcome the rage ruling her life.

Once she's home, Lance Cummings becomes a constant source of indigestion. Lance is a single father who learned first-hand the devastating effects of a damaging relationship. He sees through Samantha's nasty temper--straight to her cry for help. He wants to help her, but he also wants to know why Samantha ran from him--and their future--twelve years before.

Taking care of her Grams, dealing with an alcoholic brother, and getting Lance to remove his annoyingly attractive nose from her business is draining on Samantha. And she's only got three weeks to finish her stagnated novel or her publisher will drop her. No pressure. To top it off, pretending to hate the man she actually loves makes each day in Vermont harder than the last. Especially when Lance turns up the heat.

And of course, a new release wouldn't be complete without a little interview with our author...where I get to ask all kinds of fun questions! Justine was so nice to answer these for us, and we love to share them with you.


Omnific: All American Girl is your second book with Omnific. Was the process any easier knowing what to expect or was it just as nerve racking as the first?

Justine Dell: I think no matter how many books you’ve written or published, it’s still a very uneasy feeling when you let your baby into someone else’s hands.  The process was easier, but I don’t think that anxious feeling will ever go away.  We writer’s are a tough—but sensitive—bunch!

Omnific: Your female characters seem to be strong, independent women with an underlying weakness (which I love!). Do you think that’s indicative of real life?
Justine Dell: It’s definitely true for me. My husband actually told me once I was like the cowardly lion—all bark but no bite. It suits me. J I think everyone in life has some sort of weakness, but some people are just better at hiding it.

Omnific: All American Girl deals with that “first love” and having the opportunity to reconnect. I think that every woman remembers that first love in detail…and subsequently what went wrong. Is there anything you would change about your first love and how it ended?
Justine Dell: I LOVE writing romances about first love reconnecting. My first book, Recaptured Dreams, falls in that same category. There’s something so beautiful and innocent about that first love, and when you are able to revisit it at a later stage in life, it can become so obvious that it never would have worked until both people had matured and grown. It can become even more amazing.
I’m lucky, I happen to still be with the first man I loved. We have our own love story…and it’s my favorite.
Omnific: Last time, I asked about your favorite romance scene in a book…this time I want to know what your favorite romantic (chick flick) movie is? And what your favorite thing about it is?

Justine Dell: During my upcoming blog tour I actually do a post on my top 6 favorite romance movies. It’s hard to cut it down to one. My most favorite recent movie is The Proposal. First, I LOVE, LOVE, LOVE Ryan Reynolds. And in this movie, he’s so wonderfully clueless yet determined. And second, Sandra Bullock plays a wonderful strong, independent women with an underlying weakness…which I obviously love. J It’s my kind of movie!

Omnific: Finally, I’m going to cheat because I know the answer to this one…but can you tell us a little bit about what’s next?

Justine Dell: Oh yes, I would love to! Omnific has recently picked up my third contemporary romance, Until Next Time.   It’s a story about a funeral director named Piper, who refuses to love because she’s seen so much death in her life, and her knight-in-shining armor, Quinn, a medically discharged Air force pilot, who comes from a long line of people who love to love, no matter what it cost them.

I’m really excited about this story because it’s the first one I’ve written that doesn’t have a reconnecting romance. New, terrifying—but thrilling—territory for me!

Thank you so much, Justine! Congratulations on your new release, and I know that your readers will love it!

If you want to find Justine, here's where you can:

Posted by Omnific Publishing at 11:14 AM