We are so excited to announce our newest romance, Love In The Time of The Dead, by Tera Shanley. In fact we are so excited, we are giving a copy away, along with an AWESOME Zombie Survival Kit!!! Have you seen the scary-cool cover?!?! 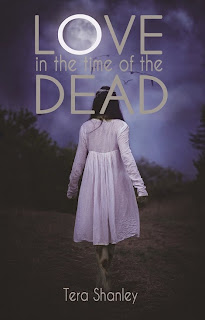 You will learn more about that creepy zombie on the cover, and many more, on October 22nd! Just in time for Halloween!

Synopsis:
Laney Landry has been fighting Deads alongside her brother and friends for three years. But she has a secret. She's immune to Dead bites and has to find the right people to trust with the information. Her team rallies around her to find a doctor who can extract a vaccine from Laney which could fight the virus that ended the world.

Sean Daniels leads a colony that provides her team with much needed shelter and supplies. He is obviously interested in Laney. The question is whether he's only intrigued by her as a source for the possible vaccine, or for something more. Tests for the cure might push her body beyond what it can endure, and just as she faces a ghost from her past, her longtime teammate Derek Mitchell hints at an interest in more than just her Dead slaying abilities.

Two honorable and alluring men - one colossal decision to make. Despite historically bad taste in men, can she rise above the chaos of the apocalypse and choose the one who deserves her heart? The right choice could mean the difference between surviving...and living.


Add Love In The Time of The Dead to your TBR and WIN an ebook or:

it all fits into the Zombie Survival Kit lunchbox :)


a Rafflecopter giveaway
Posted by Tracitalynne at 10:09 AM 0 comments