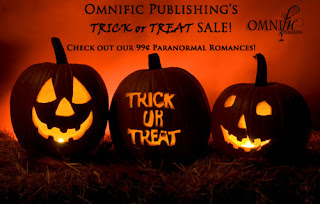 It’s October, the leaves are beginning to change color, the days are getting cooler, and Halloween will soon be here. In honor of the spooky and the eerie, Omnific has put two of our FABULOUS paranormal ebooks on sale!
For a mere 99₵ you can get either Lisa Sanchez’s supernatural sexy Quinn or KC Randall’s yummy vamp, Gregory through the month of October.
Immortal Awakening

Gregory has lost interest in being alive. He’s been doing it for far too long. But dying is too much trouble, so he simply continues to exist in all his jaded, apathetic, eternal glory. In a hopeless attempt to find a diversion, he takes a night class at the local community college where he meets Nikki Christian. She seems to be everything he is not—young, open, honest, hopeful, charitable... the nauseating list goes on. However, Nikki is also overtly intuitive. She can see through lies and secrets in ways no human should, and Gregory has lots of secrets. Obviously, he should just eliminate her and be done with it. But there is something beguiling about a woman whose countenance shines like the sun in a world that’s gone dark.
While Gregory struggles to understand this woman’s mind and the disturbing effect she seems to have on him, he realizes that he’s not the only one with an interest in Nikki Christian. There’s a jealous ex-boyfriend, the other suspicious Immortals, and now a mysterious assassin has turned up. Despite Gregory’s best efforts to keep this mortal girl alive, it seems Fate has other ideas. Is it possible for even a devil to find Happily Ever After?
Eve of Samhain

As a college senior and server at Hanaford Park's hottest nightclub, twenty-one year old Ryann Pierce's plan was simple: work hard, make lots of money, and avoid the ass-grabbers at all costs. What she never planned for was Quinn Donegan—the living, breathing advertisement for sinful behavior that waltzed into her life.
With an angelic face, a hard body and a butt-load of charm, Quinn had a way with the ladies—a lot of ladies. Cursed with a deadly, addictive touch, his trail of indiscretion blazed across five hundred years. Tired and jaded, Ryann is a shocking revelation Quinn didn't see coming.
Filled with desire, yet unable to touch one another, Ryann and Quinn embark on a daunting journey, battling frustrating physical limitations while exploring their new love. In a race against the clock, Ryann learns she must plead for Quinn's life before…the Eve of Samhain. Determined to end her lover's suffering, not even the danger dogging her every move can keep her from her mission.
So pick up your ebook of one of these great paranormal stories to curl up with on a cold fall night!
Posted by Omnific Publishing at 9:36 AM