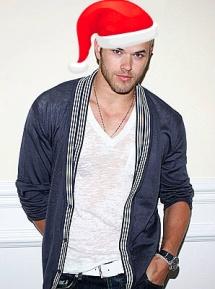 I’d like to thank Omnific Publishing for hosting such a wonderful giveaway and for including a copy of my young adult paranormal romance/thriller Embrace. Join Isaac and Madison as he shares one of his holiday traditions.

“My grandfather used to bring me here on Christmas Eve.” Isaac Addington held his arms out wide to indicate Ipswich Bay and Annisquam Lighthouse. “My parents would have killed us if they knew.”


“Isaac, it’s freezing.” Madison held onto the hood of her pink ski jacket to keep it from blowing off and tried unsuccessfully to share his enthusiasm about being out at midnight on the most blustery night of winter.

“Trust me. You’re going to want to see this.” Isaac paused, his hand near the heavy wooden door of the lighthouse.

A faint click whispered through the night as his powers unlocked the door. A moment later they ascended the winding staircase to the top. Knowing the break from the cold would only last a few minutes, Madison reveled in it. Too soon they were through the trap door and out onto the balcony. Isaac wrapped his arms around Madison. At the same time the breeze stilled and the air warmed to a bearable forty degrees.

“My grandfather taught me this,” he said.

As if his words turned on a radio, the song Frosty the Snowman rang out around them. The images of half a dozen elves dressed in colorful jackets, hats and mittens appeared out of nowhere. They rolled a low hanging cloud into three large balls as if it were a blanket of snow. Madison giggled as a mischievous elf whipped a snowball at the back of his friend’s head.

“He does that every year,” Isaac said.

“Your grandfather used to bring you here to watch Santa’s Little Helpers make a snowman?”

Isaac shrugged. “I was eight the first time. It was way off the cool charts back then.”

“Still is,” Madison confirmed. She glanced back at the parking lot. Isaac’s Jeep was still the only vehicle there. “Can anyone see this?”

“It’s only visible for about a hundred yards, but yeah. That’s why we had to come so late at night.”

“No wonder you and your grandfather had to sneak out. Using magic in the open like this,” she said with mocked horror.

Three elves climb onto each other’s shoulders and place a black top hat on the snowman’s head. It shimmered, then shook its body and said, “Happy Birthday!”

Madison outright laughed this time. “That’s from the movie.”

Isaac gave her a squeeze. “Frosty was my favorite holiday cartoon when I was little.”

The scene in front of them faded, leaving the sky a midnight blue canvas flecked with bright white stars. The faint sound of jingle bells could be heard as a sleigh pulled by eight reindeer pranced across the moon. Madison could have watched the sky all night, protected from the cold in Isaac’s magic bubble, but he turned her to face him and slid an arm around her lower back. Silver Bells now serenaded them as they swayed to the music.

“Merry Christmas,” she echoed against his lips, enjoying being in his arms in such a magical place.

Cherie Colyer, author of Embrace, has a couple of fun giveaways going on this month. Be sure to stop by her blog for more information.

Happy Holidays, everyone!!
Isaac and Madison

Be sure to SHARE THE LOVE to enter to Win a Season of Sweetness Kindle full of YA Goodness. Go HERE for the Rafflecopter!

Posted by Omnific Publishing at 6:00 AM

Email ThisBlogThis!Share to TwitterShare to FacebookShare to Pinterest
Labels: contest